Between waving a snowy England goodbye, to stepping out into the wall of Bangkok heat, a not too blissful 21 hours had passed. Thankfully, we had pre-booked a hostel, could jump in a taxi, and head straight there. The only street we’d ever heard of was of course Khao San Road, so we’d opted for a hostel on the street parallel.

As we drew closer and closer to the centre on Bangkok on day one of our epic trip, we started to grow slightly nervous of what to expect… and even more so when we were told by our driver that we’d reached our street. There were market stalls everywhere, cars, scooters and nifty tuk tuks zooming about, and an array of distinct smells in the air – exciting yet daunting. And then… *cue angelic ray of light* beamed Nap Park Hostel. From the botanical pathway to the front door, to the enormous air-conditioned social area, it was cool, calm and, mostly crucially, clean.

The staff at reception were helpful and welcoming, whilst the dorm itself was spotless, modern and cleverly set out. We went for the basic 22 bed dorm and couldn’t believe how sleek it was; especially as it only cost 350 baht a night (about £7). Luxury dorms are available but the only differences we were aware of were dorm size and fewer beds per room. 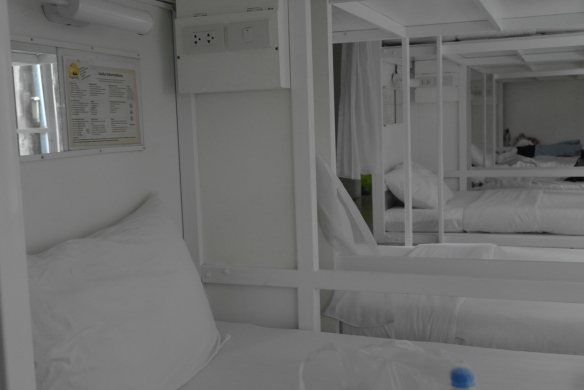 Our dorm was divided up so that there two bunk beds per section. At night thick mosquito blinds were pulled down around the bed, creating your own private compartment, complete with a personal light, mirror and plug socket.

Security wise, we felt that we and our belongings were completely safe. You have your own locker in the dorm, which is large enough to hold your entire rucksack (but bring your own padlock, otherwise you can buy one from reception). Each guest is given a wristband which acts as the key to access your dorm, and the main doors at night. No one can get into the dorm unless they have one of these, and you can only access your specific dorm.

There are separate male and female bathrooms and as they’re on every floor, they’re never crowded. These, like the dorm, were spotless and the best bit – they had hot, powerful showers and even hairdryers. Although we only stayed a couple of nights, having brought so few clothes with us, we took advantage of their cheap laundry facilities, upstairs near their small rooftop garden. For a wash it cost 20 baht (about 40p) and 10 baht for a 15 minute tumble dry.

All the above made for a top-rated hostel, but the social areas are the main reason we’ve re-booked for when we return to Bangkok in four weeks. The lounging futons made for the perfect place to meet other backpackers, play games, a quiet nap or even watch a film. You could buy drinks and snacks there, the local (and cheapest) beer, Chang, costing 40 baht, just 10 baht more than the 7/11. There were also several computers which you could use for free, alternatively you can connect your own device to their high speed Internet with their free WiFi (accessible all over the hostel).
You can buy breakfast outside next to the lounge chairs – loads of fresh fruit, toast, eggs and cereals. 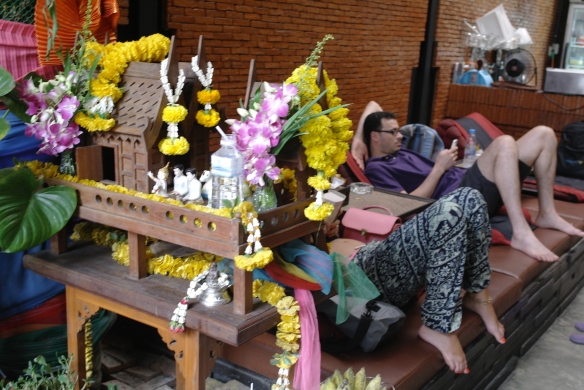 Fellow backpackers chilling outside after breakfast…

The only negative thing we have to say about this hostel is that as we stayed there first, it set the bar far too high for our future hostels! Get more info from their website here, you can book with them directly or via Hostelworld.

Tell us your thoughts... Cancel reply